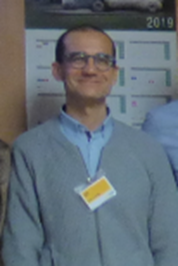 Yes Juan Carlos we know you hate this picture, but you’ve been running away from the cameras during all the project…

Our tutor has become way more than a tutor. Our jedi master reunited all of us and got to keep all of us padding in the same direction during all the contest.

He taught us the basics of automotive, the CAN bus, MOST, D2B or the secrets of CANalyzer. Any other teacher would have stopped there, but “JC” shipped in this journey with us and he has been an unvaluable help.

Juan Carlos had to deal with Renault and with the university as well, he got us a place to work and helped us to clean this warehouse and turn it into our “garage”. And he even opened us the doors of his house when the university doors were closed.  He helped us with technical problems, organization problems, and even personal problems. We have shared meals, coffee, online meetings and even drinks. This year we have actually seen him more than our girlfriends.

We are still not sure how he managed to argue with each of us and no give up when he heard about the disasters we had done. He has demonstrated more patient this year than the Hulk.

There are not enough words we can write to express how thankful we are. We would like to think that we taught him something too, but we are not sure if rolling a cigarette is a valuable knowledge.

Definitely the main gear of this project. We would follow him to Mordor to throw the ring into the fire of Mount Doom. 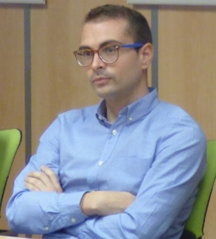 The busiest person in Renault. He is a two-stroke engine “busy” or “in a meeting”. He has had the red icon in his profile picture since windows messenger.

He was the main link between Renault and the University, he offered the contest to JC and joined us. He always tried to make us work better, he introduced us agile methodologies, created the website and withstand all our complains about Renault burocracy.

“When will we have the car? Can we make a new order for new components? Why don’t Renault follow us on Instagram

? “ Those questions probably still torment him before he goes to sleep.

He has always been behind us pushing us forward, it was not easy to work with four twenties, but he can be proud of his job.

Even though he did not believe we would get the car ready in such a little time we still love him.

Keep an eye of him, with his interns army he will dominate Renault one day.

He will always be remembered as the positive coach. He always came with fresh ideas and compliments. We have to admit he is very mature even though he looks like sixteen years old.

It is not that he died or anything, but at the middle of the project he switched us for his baby. Apparently, it is harder to get a person to be autonomous than to build an autonomous car, who knows.

We appreciate your effort and your ideas Jairo, but you still have to bring the beers 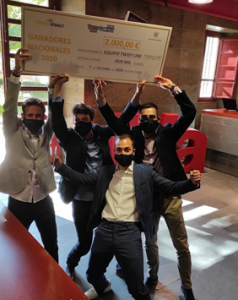 We as a team

After over a year of teamwork we are still together, this is probably something a lot of music groups can’t say. We have obviously had our fights, but they have been way less than expected.

Together we have developed an amazing project, we have all learnt a lot and it has been an incredible experience. And this have only been possible because we have been a team.

Individually we are some of the biggest disasters on earth, seriously. If we had been alone, Adrian would have filled the videos with shabby transitions and references to The Simpsons, Nacho would still be looking for the garage keys even though they were always in his pocket, Mario would be arguing about art and artist freedom with anyone who dared to say that the video needed any modification and Samuel would be so stressed he would have burnt the Twizy.

We become stronger as a team, we complement each other capabilities, and we have done an incredible job. We are proud, we are Twizyline, and we are Drawing the future.